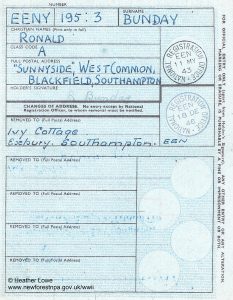 Ronald Bunday ID Card - He may have been part of the Auxiliary Army
Author: Gareth Owen

Anne Bunday recalls her memories of being at Exbury and the antics of her to be husband Ron.

I was transferred to Exbury just before D-Day with the Women’s Land Army to work on the Exbury estate mainly as a dairy maid based at the Lower Exbury farm. I joined the WLA in 1942 and before that I worked at Vickers Armstrong building Spitfires. The main factory had been bombed out before I joined the company and production had been relocated in all sorts of buildings throughout Southampton -I was placed in the old Sunlight Laundry.

I lodged with Mrs Searle who lived at Gatewood farm which was one of the farms on the Exbury estate. Mrs Searle became very dear to me over the years especially after I married one of the estate workers and went to live in the village. Her daughter Moira also worked on the farm and did the village milk round in an old van. One day Moira had to go past the bodies of the men brought out of the wreck of the German plane brought down just before D-day in the parkland facing Exbury House. My future husband also witnessed the plane crashing but he was sheltering under a tractor that he was working on after seeing the plane coming down towards him in the fields. German planes would often shoot up men working in the fields so he wasn’t taking any chances that day!

I had to pass many troops camping in every available space alongside the roads and in the fields on my journey to and from the farm every day. There was a gun emplacement at Lower Exbury and we Land Girls would often smuggle out some fresh milk to the men in the unit. I don’t know if Mr Honey the farm manager ever knew what we got up to but he never commented. There were many Army camps in the area and a large hutted camp for the workers at Lepe where they built the caissons for the Mulberry Harbour that sailed with the D-Day force. There were camps at Lepe Farm and between Lepe and Whitefield Farm on the Lepe to Blackfield road.

I had a very happy time working at Exbury as I loved dairy work. I also enjoyed the dances and going to the cinema that was situated in the grounds where Exbury’s large modern greenhouses are now situated. The area was also occupied by naval accommodation huts that in later years my husband bulldozed down when Exbury Gardens needed the ground again as a nursery. We still have a chair that he liberated with RN stamped underneath it. The cinema evenings were often lively as the film frequently broke down and there would be a lot of catcalling and stamping of large booted naval feet.

D-Day was strange, one minute the area was heaving with troops, making us guess something big was about to happen at this stage of the war, then we went into work and the whole district was totally devoid of personnel and equipment apart from the remaining WRNS operating the boats in Beaulieu River. On my day off I would cycle to Hythe and take my bike on the ferry to Southampton then cycle to Shirley to visit my parents who oddly moved back from the safety of rural Dorset at the beginning of the war to Southampton. Many a time we sat through the bombing in our family shelter in Dale Valley Road. I can remember a Land Mine floating over the area and praying it wouldn’t go off in our road. It still did damage to our house when it went off. In those days I could cycle safely through the troops stationed along side the roads – perhaps they thought I was too young as I was just less than 5′ in stockinged feet!

Sometimes I would attend dances in Southampton put on for the badly burnt airmen who were recuperating in the area. We were specially selected as they didn’t want the young women showing any sign of emotion or shock when they met the damaged men as we had to help them get back into main stream society. They were such lovely men and so brave.

On VE night my future husband Ron and I gravitated to Lower Exbury and just enjoyed the peace of Beaulieu River now no longer at war. Ron became restless as we could hear a riotous party going on at Inchmery House where the Free French were celebrating in fine style. He wanted to see what was hidden in one of the sheds in the grounds of the house. Much to my horror (and terror) he efficiently broke into the shed and was pulling out various armaments and was chortling with glee over the assorted pieces that he found and was comfortably working mechanisms with the guns that were stored in the hut. I was petrified as we could have been shot there and then especially as the Frenchmen were roaring drunk by now. Ron was in the Home Guard but according to his mother he would disappear all night and other times long before the defence of England was taken up by local men. Years later he told my daughter that ‘If the Germans came he was going to help blow up the tanks out on Mopley Common then go underground’. As a little girl at the time she didn’t understand but we wonder now if he was part of the Auxiliary Army (Churchill’s Secret Army). He was certainly at home in that shed full of guns. The tanks he referred to held stored oil and belonged to the AGWI which later evolved into the giant oil refinery. We will never really know what he got up to in the war as he died when he was only 58. Things are now emerging about the Auxiliary Army – perhaps one day we will find out whether he was a member or not. As I said Ron had the dubious honour of bulldozing down the Navy encampment in the grounds of Exbury House after the war.