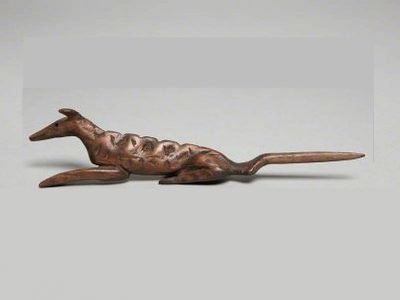 The original article written by Sonia Aarons-Green for ArtUK can be found here: https://artuk.org/discover/stories/tom-charman-a-fairy-tale-in-the-new-forest

The New Forest Heritage Centre’s collection of Tom Charman woodcarvings can be viewed at ArtUK: https://artuk.org/discover/artists/charman-tom-18631939/search/artistel:tom-charman-18631939/page/1/view_as/grid

Tom Charman‘s curious wooden carvings and mysterious, visionary works of art draw us into the enchanting world of fairies and elementals – revealing the legacy of a Victorian fascination for clairvoyance.

Born in Horsham, Sussex on 14th March 1863, Tom’s parents ran a grocery, his father from a long tradition in farming, and his mother an educated woman with a love of literature. At the age of seven, Tom records seeing a fairy riding a brown rat in his bedroom although he was not to see another for 30 years.

Completing his formal education at the age of 12, Tom’s love of the extraordinary led him to visit the music halls; his secretive excursions were often concluded by a beating from his strictly Methodist father. When his mother fell ill and, as the youngest in a large family, he was asked to remain at home, he would often sit and read to her through the night, further advancing his education.

At five feet and six inches, Tom was described in his son’s memoir as ‘of wiry build, fair-haired with a handsome well-boned face; quite a dandy in his bowler hat, high wing collar and cane walking stick’.

Tom unsuccessfully tried his hand at several occupations, including a door-to-door sewing machine salesman. A natural showman, by 1887 his love of performing and the music halls were providing him with considerable success as a ventriloquist, mime artist and character raconteur; he travelled the home counties performing solo and in a vaudeville partnership with his friend Jack Pain.

Meanwhile, his distinctive artistic flair, inspired by Aubrey Beardsley and the caricatures of Thomas Rowlandson, had already brought some success – an early illustrative commission of numerous drawings for Charles Roper’s 1895 book Whispers from Fairyland.

By the turn of the century, Tom had joined a group of actors, artists and society eccentrics in search of an Arcadian lifestyle in the New Forest. They followed the fashionable trends for travelling in horse-drawn caravans and a passion for the natural world. Among his collection of friends was the Reverend James Leith Macbeth Bain, the spiritualist minister known as Brother James and famous for the hymn tune Brother James’s Air. It was such connections and experiences which would dictate Tom’s artistic future.

Still determined to use his natural gift for illustration, Tom decided to seek his fortune in America, funded by a small legacy following his mother’s death, where he worked briefly on a New Jersey newspaper as a cartoonist. It was an unhappy and lonely experience. Unable to create and persuaded he was being poisoned by his landlord, he soon returned to Sussex.

Tom’s proclivity to see fairies as an adult – and his aptitude for clairvoyance – were revived when he reconnected with the New Forest in a move to Nomansland, near Bramshaw. By 1911, the 49-year-old Tom had arrived to help his sister Sarah and brother-in-law William Halls in their post office, grocery and bakery. He had recently completed the illustrations for Henry Burstow’s Reminiscences of Horsham (1911) in which his father Michael is mentioned as a bell ringer, but he was struggling to make a living.

While walking in the Forest, Tom met the amateur geologist, anthropologist and Quaker Ernest Westlake, who was to found the Order of Woodcraft Chivalry in 1916 and set up a ‘Forest School’ on land at Sandy Balls, near Fordingbridge. Ernest had built a small wooden bungalow on The Ridge in Godshill and was living there, following his wife’s death, with his daughter Margaret and son Aubrey. Ernest and Tom discovered they shared many passions.

Inspired by the prehistoric charm and weird beauty of the New Forest, Tom produced literally hundreds of carvings, recreating the creatures and elemental spirits he perceived in the twisted roots, branches and twigs. He would also sit for hours drawing the ‘little people’ that appeared to him as he walked among the trees, and uncovering the images he believed they had created in found stones and flints.

As he became better known, the popular psychic magazines of the time looked on him as something of an authority and The Occult Review of February 1917 featured an article titled ‘A Seer of Nature Spirits’, on Tom’s discoveries: ‘a form of life which passes us by entirely in our normal states of consciousness’.

An exhibition of Tom’s carvings and stones was held at Brighton’s Old Sterne Hall (under the auspices of the Brighton Spiritualist Brotherhood, chaired by Countess Verneuil and attended on occasion by Sir Arthur Conan Doyle). Some 1,200 items were displayed which included ‘gnomes, lizards, snakes of all sorts, an Indian sacred beetle, a sea snail, and other weird objects…’ The report in the Sussex & Surrey Telegraph goes on: ‘He has seen Indians, clairvoyantly in the woods, and has reproduced some of them with almost uncanny exactness.’

In the early 1920s, Tom fell in love with Ernest’s daughter, the 22-year-old Margaret, an Oxford anthropology graduate. Much to Ernest’s consternation and despite his strong objections, the relationship blossomed and eventually Ernest relented, passing the bungalow to Margaret and Tom who would go on to set up the Godshill Pottery there, with the assistance and instruction of Denise Wren of Oxshott Pottery.

Tom and Margaret’s honeymoon – nine weeks camped in the Forest, living apparently on dry lentils and bloaters (a type of smoked herring) and, at first, accompanied by Ernest – was followed by a period on the road travelling in a Gypsy caravan. Finally, they returned to Godshill where all three set up home together. Ernest was tragically killed in London in 1922, aged 67, when he fell from the sidecar of his son Aubrey’s motorcycle as it struck a tramline.

Sir Arthur Conan Doyle lived at nearby Bignell Wood, a large house at Brook, and was also passionate about the existence of fairies. Sir Arthur became a frequent visitor to the little house on The Ridge, along with others intrigued by Tom’s theories and experiences.

Tom was described by Conan Doyle in his popular book Coming of the Fairies (1922) as one ‘who builds for himself a shelter in the New Forest and hunts for fairies as an entomologist would for butterflies’.

Tom’s haunting yet engaging wood carvings, decorated stones and flints, and strikingly spontaneous drawings – occasionally in charcoal but mostly in pen and ink, and watercolour – brought Tom recognition at London exhibitions in the late 1920s and 1930s. He and Margaret attended the annual Artist Craftsman shows (arranged by the Knox Guild of Design & Crafts) at Central Hall, Westminster from around 1929 to 1935. There he displayed and sold his work alongside other famous arts and crafts devotees as well as at gatherings of followers of the spirit world.

It is a tribute to the late Danae Stammers (Tom’s daughter) and the Charman family that this collection is now in the care of the New Forest Heritage Centre in Lyndhurst.

The full story of the life of Tom and Margaret Charman and their children Chris and Danae is told in Christopher Pan Charman’s 2019 memoir In the Spirit of Godshill, published by and available from Millersford Press.

A film of Chris Charman and his artist wife Kate – which includes Chris talking about his father’s carvings and how they revived Godshill Pottery – can be viewed on the Millersford Press website.

It seems that some required fields are empty or you have not agreed on licence
LOCATIONS:
Godshill
PERIODS:
Modern
SUBJECTS:
Arts and Crafts
PEOPLE:
Charman, Tom
DATA SOURCE:
Contributions