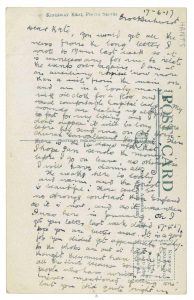 Cataloguing old, indeed new, postcards is both a fascinating and instructive process. It gives one an insight into peoples’ views/opinions/feelings, and the older the postcard, the more interesting it is.

One example is that entitled “Views of Brockenhurst”, featuring five contemporaneous aspects of the village. It is dated the 17 June 1917 and when looking at the scenes one is immediately struck by the absence of both crowds and traffic.  If those scenes were to be photographed today (assuming they can all be replicated), no doubt they would be that much busier.

The writer does not leave us his name, but the card is addressed to “Dear Kate” – perhaps his sister in that there is a reference to his having written a long letter to “Mum” the previous week. We then learn that the writer is at an auxiliary hospital and in a “lovely marquee” enjoying a comfortable bed.  One imagines that he was a member of the armed forces and suffered injuries whilst on active service in that, poignantly, there is then a reference to his wounds healing up but “altogether too fast for my liking”, implying that he was due to be posted back to his corps somewhere in France.

He next refers to his having received Kate’s letter dated some two months earlier, the 17 April 1916. She seems to have suffered from appendicitis, though not badly.  We know all of this detail because of the clarity of the writing, almost akin to copperplate.

The card ends mid-sentence implying that it was accompanied by a second card, or perhaps a note. We shall never know.

One can only hope that our correspondent did indeed make a full recovery and was ultimately restored to his loved ones in full health after the Armistice.