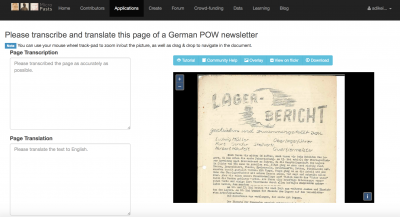 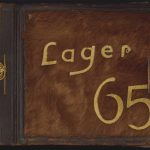 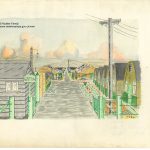 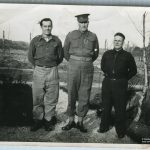 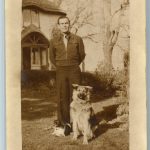 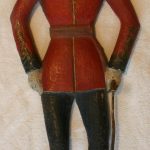 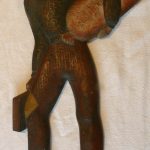 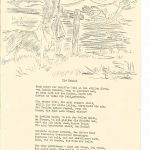 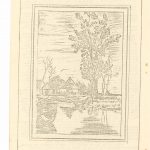 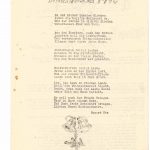 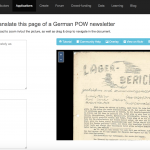 Max Mueller (seen in the photo with one of his German Shepherds Rex) was the senior German Office at the Camp and also acted as the liaison between the German PoWs and the British staff.  After the war Max chose not to go back to Germany and ended up settling in Brockenhurst later becoming the well-known and liked local butcher. He married and had a family (who still live in Brockenhurst) and his family have kindly let us digitise and have access to their collection of WWII material.

The collect consists of a large cow hide bound adorned photo album that includes poems, artwork, photographs and the names of the German PoWs, a smaller photo album of the PoWs in a local garden, four wood carvings that adorned the entrance gate to the camp, seven newspapers with an assortment of loose pages and the script for a play.

In the second photo we can see Max Mueller, Camp Regimental sergeant major (RSM) and an unknown POW.  We think this photo is the only photograph showing part of the grounds of the POW camp and we think is was taken in the officers are. You can just make out the perimeter fence in the background.

Can you help others to enjoy the Newsletters?
If you can read German and write English fluently and have a little time to help translate these Newspapers please take a look at the MicroPasts website where you can sign up and work collaboratively “with the Crowd” to transcribe the Newspapers and the play. Once fully  translated we will then produce a downloadable PDF of the translated newspapers and play for you to enjoy.

Links to articles about the documents and artefacts from Setley Camp:

Play titled ‘BEHIND THE SCENES A vaudeville game‘

To find out more about the camp see the Setley Prisoner of War Camp – Overview article.

It seems that some required fields are empty or you have not agreed on licence
LOCATIONS:
Setley
PERIODS:
Modern
SUBJECTS:
Archives and Libraries
Diaries
Military
People
WWII
DATA SOURCE:
Contributions
New Forest Remembers