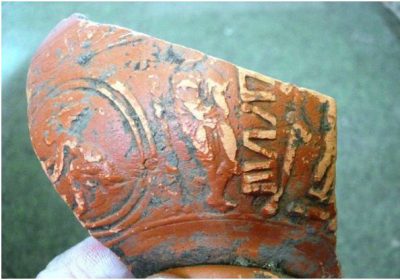 An archaeological investigation was carried out by Southampton City Council Archaeology Unit for Halcrow Group Limited on behalf of Scotia Gas Networks at Lepe, prior to the laying of the Cross-Solent gas pipeline. This covered the areas to be used as a site compound, a drill site, the 3km long pipe-stringing area and associated works. The work consisted of a watching brief on topsoil removal with further investigation of threatened features, and took place between September 2010 and April 2011.

Twenty-two areas were stripped. Most contained no archaeological features or only post-medieval ditches. A number of flints were recovered including a Mesolithic core and later prehistoric pieces.

One trench, T11, produced a complex area of Romano-British activity including ditches, pits, kilns/hearths and structural features. This area was subject to further work to retrieve dating and environmental evidence. This revealed some evidence of 1st and 2nd century activity but the main phases of occupation dated to the 3rd and 4th centuries, when a rectilinear field system, aligned on the Roman road was laid out across the landscape, followed by the production of grog-tempered pottery in a number of small stone-built kilns.

Air photos and previously discovered finds suggest this newly discovered settlement covered an area some 300m square straddling the narrow strip of land along which Roman Road (Margary 423) passed to reach the coast of the Solent less than 1km to the south. The settlement undoubtedly formed an important node between land and sea trade in the Roman period and will merit further research.

You can access the report here: Report on a Watching Brief and Archaeological Excavation at Lepe, Hampshire, A2010.77

It seems that some required fields are empty or you have not agreed on licence
LOCATIONS:
Lepe
PERIODS:
Romano British
SUBJECTS:
Archaeology
Industry
DATA SOURCE:
Contributions