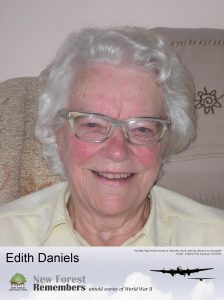 Edith Daniels was born in London, but moved down to Holbury in 1937, followed by the whole family in 1938. She was a young teenager at the beginning of the war and by then attending Brockenhurst School during the day. However, she recalls the bombing raids in the area during the night. She left school at sixteen and went to work at British Powerboat. She describes her work experiences and attending dances where they met many of the troops stationed in the area.