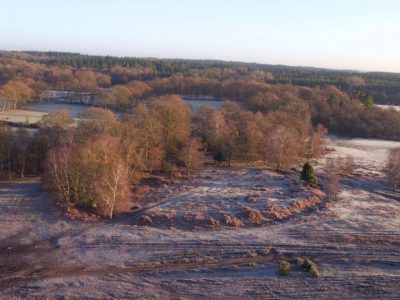 Join us for a drone tour of Iron Age and Bronze Age sites at Matley Heath in the New Forest. These are just some of the thousands of historical sites we work to protect every year.

Bournemouth Archaeology have been commissioned to undertake a large geophysical survey of the two sites to see if we can learn more about them and the New Forest landscape they reside in. Results to follow.

The monument includes a slight univallate hillfort situated on the top of a sandy knoll immediately south of a stream within the New Forest. The hillfort is sub-circular in plan and has ramparts 1m in height and 3m in width which enclose an area of approximately 0.3ha. An external ditch up to 3m in width and 0.9m in depth and a slight counterscarp bank are visible around the eastern, western and southern sides of the rampart. On the northern side of the hillfort the rampart utilizes the natural scarp and has no obvious external ditch, although a depression 7m in length, 0.2m in width and 0.3m in depth projects northwards from the base of the scarp. A break in the eastern rampart 7m in width and a 4m wide causeway over the ditch probably indicate the original entrance. The area enclosed by the rampart is undulating and includes a mound 11m in diameter and 0.9m in height situated against the southern bank. The hillfort has been partially disturbed by a trackway which bisects it on an east to west axis.

Bowl barrows and a bell barrow on Matley Heath