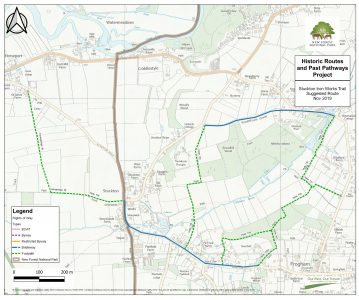 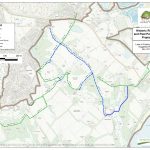 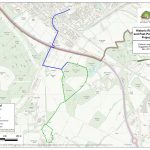 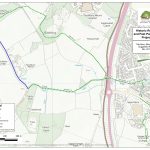 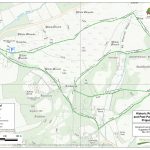 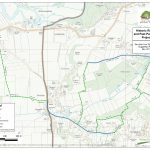 Here’s a preview of five new self-guided walks we are developing along existing rights of way in and around the New Forest National Park.

With the help of volunteers, we analysed historic maps dating back to 1759 to research around 700 current rights of way, in 37 parishes. After selecting some of the oldest existing routes, around 260 walking surveys were conducted to help develop trails and whittle down the contenders.

Volunteers also researched historic documents to review what history could be found around these older rights of way. This work has led to these five new trail routes being suggested for their abundance of historic features and their connection to residential areas.

The trails need more work before they are finalised, so we need your help!

We would like people with memories of the areas to share their stories with us for possible inclusion in the trail information.

We are also working with Hampshire County Council’s access team and local volunteers to improve the rights of way. We have spoken to several landowners with included rights of way on their land, but there are still those we have not been able to get in touch with yet. If you’re one of these landowners, we would love to talk with you so please do get in touch.

Follow the links below to discover what we’ve uncovered so far. Each one includes a map and details of how you can get involved.

Are you full of fascinating facts about the New Forest? Do you have family or friends who know everything there is to know about its history?

The New Forest National Park Authority is on the hunt for memories and stories surrounding five new historic trails.

The five trails have been selected from the Forest’s established rights of way for their abundance of historic features and connection to residential areas.

With the help of volunteers, the NPA analysed historic maps dating back to 1759 to research around 700 current rights of way, in 37 parishes. Some 260 walking surveys were conducted to whittle the contenders down.

Now the routes have been selected, the search is on for more facts, figures and colourful tales relating to their history.

Gareth Owen, NPA archaeologist, said: ‘I hope the five selected areas will have something for everyone, giving walkers a real insight into the mix of history we have here in the New Forest, as well as the opportunity to visit some lovely, hidden away, locations.

‘The volunteer researchers have, so far, only scratched the surface of what history dwells in these locations.’

The five trails are:

This trail starts at Fordingbridge cemetery and passes the site of a Bronze Age cemetery before continuing to Stuckton. Stuckton was a hub for smugglers in the late 18th Century and part of this trail is likely to have been used to smuggle contraband from Christchurch Bay to Fordingbridge. On this trail is Stuckton Iron Works, which was built in 1790 and was operational until the foundry closed in 1908.

A contender for the oldest tree in the New Forest, the Moyles Court Oak can be seen on this trail, which goes around Rockford Common. The route is steeped in history with evidence of over 4,000 years of land use and farming. A big impact on this area was made by the construction of RAF Ibsley during WW2. The common was used for military manoeuvres with slit trenches and gun emplacements.

This trail starts on one of our oldest routes – traced back to 1759 but probably much older – with several landmarks along the way. Hanger Farm, now an arts centre, was a working farm and settlement in Saxon times and is mentioned in the Doomsday book. The route continues along the old road to Hazel Farm and on to Netley Marsh parish, said to be the location of a battle that took place when Saxons invaded via Southampton waters. Today, the remains of an Iron Age hillfort survive as a series of earthworks on a prominent clay hill.

This route takes in St John The Apostle Church, the distinctive Marchwood CE Infant School and the site of the parsonage built for the first vicar of Marchwood, Thomas Martelli. All three projects were funded by Horatio Francis Kingsford Holloway, who bought the 500-acre Marchwood Lodge estate in 1834. The estate’s history includes use as a factory in WW2, a preparatory school and a pony trekking centre, until it was purchased by the Priory Hospital Group in 1987. Another point of interest is Birchlands Farm, which was owned by the Bishops of Winchester until at least the early 1900s and is still a working farm.

This trail passes Exbury, The Cadland Estate and on to Fawley. It covers areas used extensively during WW2 and for D-Day preparations. There are several remains of WW2 military installations throughout. There are also sites of old farmsteads, a Roman road, brickworks, mills and gravel pits, as well as ancient woodlands and Sites of Special Scientific Interest (SSSI). The paths are thought to have been used for a variety of activities, including smuggling.

The rich and varied history of these routes can be found online at the New Forest National Park website: https://www.newforestnpa.gov.uk/things-to-do/walking/historic-routes

If you’d like to contribute your memories or stories, or help to promote and preserve the trails in the future, get in touch with Gareth Owen on 01590 646652 or Gareth.Owen@newforestnpa.gov.uk.

These trails have been identified by the Historic Routes and Past Pathways project, which is part of the National Lottery Heritage Funded Our Past, Our Future scheme.