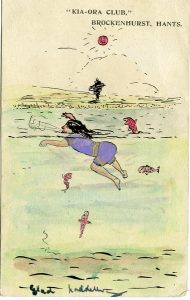 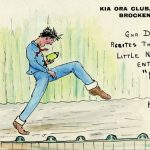 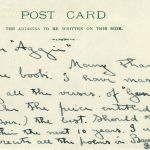 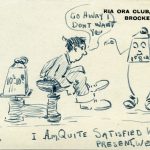 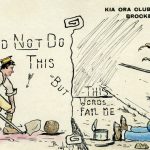 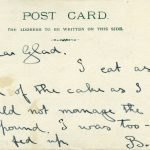 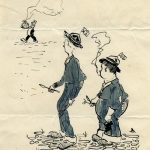 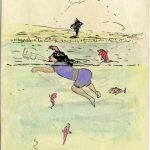 The Wairarapa archives in New Zealand contain a selection of hand drawn postcards that were created at the Kia Ora Club, Brockenhurst, Hants (Brookley Road) which were sent back to New Zealand.

The author regularly signed his work as Gunner Dobson and research by the Wairarapa archives have revealed him to be William Dobson who was born in Queensland, Australia, in 1891, where his Scottish born parents had settled. In around 1904 the family moved over to Wellington, New Zealand. William Dobson trained as a carpenter, but joined the army in 1916.

He was sent to Featherston Camp and was assigned to the artillery, where he worked with the horses that pulled the guns. He left New Zealand in January 1917, for further training in England and after a 6 week hospital stint in Manchester left for France in September 1917.

On 28 November 1917 he was seriously injured; he was leading the horses through a particularly muddy section of road when they became bogged at the same time as the German artillery starting bombarding the road. Shells struck, killing the horses and damaging bones in Dobson’s skull. He was admitted to a field hospital, and then shipped across to Brockenhurst Hospital in Hampshire, England, for recuperation.

While at Brockenhurst he also found time to make more cartoons, and he sent them to Margaret and Gladys Smith from Masterton thanking them for gifts he had received from them, although he was concerned that their cakes and sweets would lead to him putting on weight.
William Dobson fell in love with one of his nurses, Liley Wright, who lived in the nearby village of Boldre. When Willian returned to New Zealand in late 1918, Liley followed shortly afterwards and they married in Lower Hutt in 1920.

William largely put his wartime cartooning behind him, and concentrated on his work as a tiler to raise the money needed for his family, though he did find time to draw the odd cartoon for the local Hutt News.

You can read in more detail about William Dobson here.

And find more of his cartoons from other periods of his military and domestic career here.

Postcard 1: “Glad paddelling.” Shows a young woman swimming in a river, with four fish watching. The post card was sent to Gladys Smith in Masterton.

Postcard 2: “Gnr Dobson recites that delightful little nursery rhyme entitled – “Never smack the baby, always kick it on the shins.” Shows Dobson reading a poem on the stage. It was sent to Margaret Smith in Masterton and reads: Dear Aggie, Many thanks for the book. I have mastered all the verses of “Gunga Din” but like the piece entitled (P.J. Owen) The best. Should the war end within the next 10 years. I will be able to recite all the poems in the Barrack Room Ballards*. B.

Postcard 3: “I am quite satisfied with my present weight.” Shows “Billy” (William Dobson) on scales, telling 1st 8lbs to “Go away, I don’t want you”.

Postcard 4: “I did not do this.” Depicts a soldier incapacitated not from an injury but from eating too much cake. It was sent to Galdys Smith and reads: Dear Glad, I eat as much of the cake as I could. I could not manage the last half round. I was too well fed up. B.

Postcard 5: “Overheard at No 1 New Zealand General Hospital, Brockenhurst, Hants.” Shows two soldier/patients watching a cook walking past with a Christmas pudding, while they debate its size.

*Barrack Room Ballards: The Barrack-Room Ballads is the collective name given to a series of songs and poems by Rudyard Kipling, dealing with the late-Victorian British Army and mostly written in a vernacular dialect