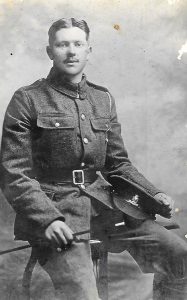 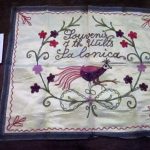 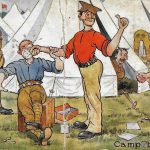 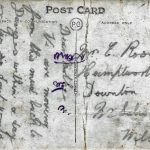 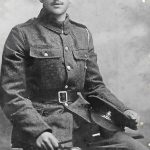 George Rose (see photo) was the third son of Eli and Edith Rose of Hamptworth Farm. He was one of nine children and was born at Compton Chamberlain in about 1895, but brought up in Hamptworth. The 1911 census records him as a farmer’s son, aged 16 working on the farm alongside two of his brothers, Richard (19) and Eli (15).

He enlisted as a Private in the 7th Battalion Wiltshire Regiment at the beginning of the war.  He served in France and then Greece, and was killed in action at Salonika on 24 April 1917, aged 22.  He is commemorated on the Doiran Memorial, Greece.

A postcard sent by George is also shown

You can read the full account of the battle on the 25th by visiting The Rifles Berkshire and Wiltshire Museum website.  Here is a link to the War Diary of the 7th Wiltshire Regiment for the 25 April 1917, Location, Greece, DOIRAN Sector

In the war diary of the 7th Wiltshire Regiment a trench map is mentioned and locations on it referred to.  Here is a link to online copies of this (and other relative maps of the area) held by the Digital Archive at McMaster University Library, Ontario, Canada: Trench map, World War, 1914-1918; Dojran, UNKNOWN. April, 1917 – 1:5,000

You may also find this map (1918) held on The Long, Long Trail website of interest: Salonika theatre overview.