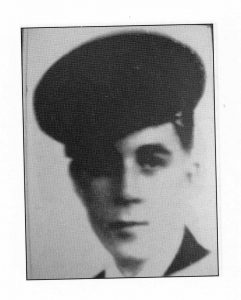 HMLCT 574, Royal Navy. He died on 6th June 1944 and until my niece Alison Trerotoli put me in touch with your site , I knew nothing about him since the family didn’t ever speak of him. After viewing your site, I have transcribed the LCT574 from June 4eth to June 8th which I include below. When a word is uncertain I have added ? to my best guess. If I can’t decipher a word I have written ?????.

Reading the log, my best bet for Uncle Ken is that he was one of the two casualties taken ashore from 574. There is no known grave but I assume that the beaches were so chaotic that burials were not all recorded or records were lost. I assume the burial at sea on June 7th was the sailor killed on LCT707, since he effectively died at sea.

0930? 13th RCA Padre held service on board, all personnel attended

Weather. wind still blowing though not so hard. Everybody keyed up.

0755. Made hurried retreat from 1500yds owing to an LCT(R) firing short. Fired? missiles dropping all around. 1 Mustang is shot down.

0830? arrived at WP-WW? and anchored. First divisions go into beach

1430. Sent party to help bring killed and casualties from 717

(arrow back to 1310) Craft hard on beach owing to vehicles sticking off doors. Unable to kedge off. 1 fairing 10 minutes

1500. Securing position decide to have guns closed up remainder of crew stand easy

1615. Bomb dropped about 40yds away no casualties and no damage

First aid appled to all casualties. Fires started in engine room, Cabin and Port Locker. A second fire breaks out in engine room. All completely extinguished. Both guns jammed. Engines both escaped damage but ????? damaged.

2215. Air raid warning sounded. Made smoke and steamed round anchorage.

Heavy air raids all night. Bombs falling on anchorage and also mines. A very heavy barrage is being put up. Beaches are catching it and ammunition dump is on fire.

0700. Called? hands and tidied up ship. Sick casualties made comfortable in the cabin and washed and redressed (?)

Tied up alongside 889 prior to towing her into dock.