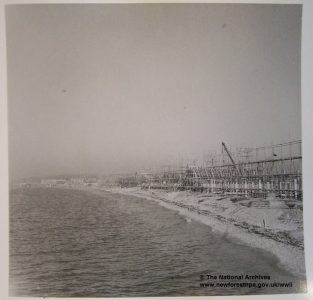 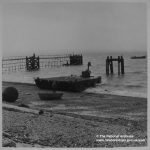 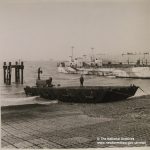 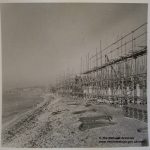 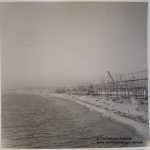 Many of the component parts for the Mulberry Harbours had to be constructed and this was done in a number of secret locations across the UK. Some of this top secret work was done at Lepe (now Lepe Country Park).

You can find the full story of Lepe’s role in Mulberry and D Day here: D-Day at Lepe

The component parts used to form the artificial harbour had code names. Find out more by using these names to search the portal.

We first thought these photos were taken at Lepe. But the caption on the back of one photo lists the site as ‘Holloway’ and taken in December 1943. Most likely this is a reference to the contractors Holloway Bros Ltd. Holloway built Phoenix Caissons at Stokes Bay. It seems most likely therefore, that the pictures are of Stokes Bay. However, the similarity to the waterfront at Lepe and Stansore Point is striking.

Some other photos uncovered show a US NAVY Seabees NL Pontoon Barge possibly at Stokes Bay as well. The barge could be used to transport ammunition, fuel, equipment and even airplanes, from cargo ships to shore. Was also used as a floating fuel station for LVT.