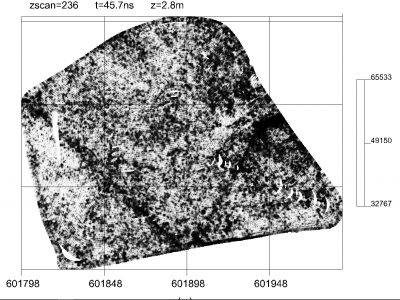 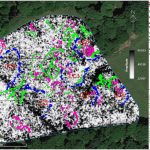 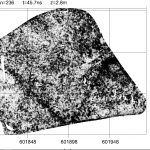 As part of the New Forest Archaeological Team’s ongoing interest and research into Buckland Rings a non-intrusive geophysical survey (in this case Ground Penetrating Radar) was commissioned from Brett Howard at KBGPR Surveys. the aim was to determine if archaeological features could be detected, positioned and recorded for future research and a better understanding of this site and other similar sites. It was also one of numerous other non-intrusive geophysical surveys being undertaken at Buckland Rings with the idea of using one site to test different methods, compare results and identify best approaches for future surveys on New Forest archaeological sites.

Previous Geophysical surveys at Buckland Rings in 1993 and 2017 have produced a mixed group of results. They show some detail but, due to the geology of the area, were very limited in what they could produce with regards to direct archaeological features.

The results provided an overall depth penetration of 2.8m, with the majority of archaeological features being present between 0.3m and 1m depth. 4.1.4. It is clear the results provide evidence of domestic occupation at Buckland Rings, through the presence of circular/rectilinear features, possible pits and the excavation trench of C.F.C. Hawkes in 1935. Areas where there is a lack of GPR responses hints at the possibility of thoroughfares through the occupation or further internal segregation of internal space during Iron Age occupation. As well as picking up Iron Age features on site it is also possible to identify potential tracks through the site allowing suggested plans of occupation and activity to be formed.

The GPR results support the Historic England interpretation of the overall chronology of this site being ascribed to multiple phases within the Iron Age.

You can find out more about some of the earlier survey work undertaken at Buckland Rings by visiting: Buckland Rings: Drone tour and Geophysics or some of the interpretation models created by Students from Bournemouth University’s Games Technology degree in the following article: Modelling Buckland Rings

It seems that some required fields are empty or you have not agreed on licence
LOCATIONS:
Lymington
PERIODS:
Iron Age
SUBJECTS:
Archaeology
Intepretation
Report
Surviving relic
DATA SOURCE:
Contributions