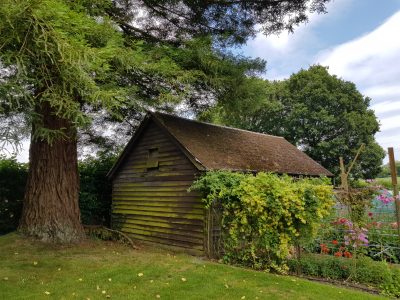 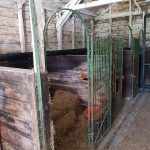 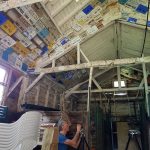 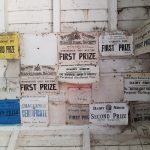 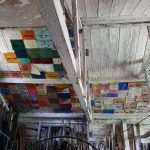 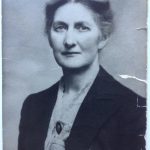 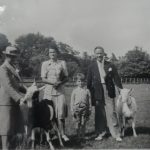 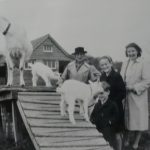 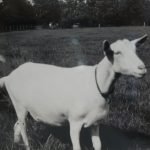 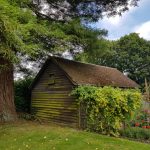 A local New Forest resident contacted us about a rather unassuming building on her property with a rather unique story and a lot to say for itself. When you enter the wooden building you notice the rather different looking stalls with their metal gates, but more spectacularly your attention is drawn up to the ceiling where there are over 550 certificates are pinned to it dating from 1919 through until 1955 and are collected from shows all around the country. We are now working with the homeowner to unlock the fascinating story of the award living goats and their owner that lived here and considering how to conserve this rather special collection.

3D Model of just small section of the roof

One of our volunteers has managed to create this partial model of some of the roof in challenging conditions. Though only a small section of the roof immediately above you as you enter it does give an idea of the feel of the shed and what we are working to record and conserve.

Short Video of the Goat Shed

We have currently undertaken a photographic record and we are now looking for volunteers to help transcribe the certificates into a searchable spreadsheet. Can you help?

The linked PDFs give a rough roof plan showing how we have broken it down into sections and then the segment photos and ID numbers that we will use to create a searchable database of the entire collection.

If you would like to help us transcribe the collection then please feel free to help by looking at the photos and then helping fill in the working spreadsheet.

You can access an editable spreadsheet on Google Drive here to add your comments and transcriptions: Transcription Working Spreadsheet

Charlotte Chamberlain was a member of the Chamberlain family of Birmingham, one of seven daughters of the industrialist Arthur Chamberlain. Their cousin Neville was Prime Minster between 1937 and 1940. On the death of their father in 1913, Charlotte and her sister Mary moved to the New Forest.

In 1927 the sisters donated land in Emery Down for a hall to be built for the newly-formed Emery Down and Bank Women’s Institute. The hall built by local builder Joseph Payne containing a crafts centre complete with stage, scullery and grassy outdoor space survives today as Emery Down and Bank Village Hall.

The Chamberlain sisters also became closely involved with the development of and notable benefactors of what was later to become the University of Southampton. Chamberlain Hall at the university was originally built in 1959 due to the endowment of the sisters and was for women only to encourage access to education for women.

One of Charlotte’s great-nieces, Joanna Close-Brooks has provided a number of photos from her visits in the 1950s including this short section of home video

Another family remembers a gentleman called Lee who drove the lorry containing the goats to the various shows around the country.

Although the British Goat Society was founded in 1879, the actual starting point came a little earlier in 1874 when H.S.Holmes-Pegler published his Book of the Goat. A year later he was invited to judge the first goat show. This took place at Crystal Palace and was the forerunner of a number of shows held at London venues such as Alexandra Palace and the Royal Aquarium.

The first British Goat Society Herd Book lists six shows held between that first show and the 1879 Dairy Show at which a meeting was held and the following resolution passed: ‘That an association be formed to be called The British Goat Society’. Eighteen members joined on this occasion.

In these early years all the committee members were men, often with city connections which enabled them to provide rooms for the frequent meetings. However at an extraordinary general meeting in 1918 it was decided that up to six lady members could be elected onto the committee. In view of some of the still-familiar names who were already making an impact this decision would seem to be over-due! Prominent women and famous prefixes or affixes included Mrs Abbey (Didgemere), Miss Barnaby (Bitterne), Miss Booth (Springfield), Miss Chamberlain, Miss Gresley-Hall (Webb),Mrs Soames (Pytchley), and Miss Window-Harrison (of Weald). Miss Pope (of Bashley) had joined ten years earlier.

Miss Charlotte Chamberlain was president of the British Goat Society in 1945, 46 & 47.

The Society’s Challenge Trophies may be offered for competition at the discretion of the Committee at shows held in accordance with Regulation 19, and will be awarded, subject to the goat or goats competing being entered in an appropriate class or classes and complying with Regulations 19, 20 and 21 so far as they are applicable. The Trophies shall remain the property of the Society. A list of the Trophies may be obtained from the Secretary.
Trophy Award Cards in respect of the Society’s Trophies will be awarded for retention by the exhibitor

The “Chamberlain” Challenge Trophy for the British Saanen Goat securing the highest number of points in Inspection and Milking at either the Royal and one other show, under the following conditions. A goat to compete must be bred by the Exhibitor, entered in the British Saanen Section of the Herd Book, shall have borne a kid during the year in which the show is held, and obtain an award in its inspection class. For each Inspection Prize, 1st, 5 points; 2nd, 4 points; 3rd, 3 points, 4th, 2 points, 5th, 1 point. A goat must qualify in the Milking Competition and the points secured therein shall be added to the Inspection points.

It seems that some required fields are empty or you have not agreed on licence
LOCATIONS:
Lyndhurst
PERIODS:
Modern
SUBJECTS:
Agriculture
Animals
Can you help?
Farming
Surviving relic
DATA SOURCE:
Contributions