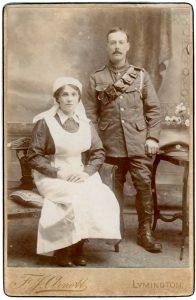 My grandfather, Alfred James Foster, was born in Boldre Parish in 1890 and later moved to Brockenhurst. Like many soldiers who survived the Great War, he never talked about it apart from one story which I recall as follows.

Early in WW1, my grandfather answered the call to arms and joined the army. When the recruiting sergeant learnt that he delivered coal by horse and cart, he was deemed to be a suitable candidate for the cavalry. After a few weeks of basic training, his unit was ready to sail for France and while they were lined up with their horses for their final inspection, my grandfather’s horse suddenly took fright. During the fracas, it bit him hard on the shoulder. The injury needed hospital treatment and, consequently, he could not sail with the rest of his unit. The horse no doubt saved his life because many of his comrades were cut down by machine-gun fire in their first charge.

While he was recovering and waiting to be reassigned to a new cavalry unit, he was put to work on Southampton Docks loading supplies onto ships bound for France.

This brings me to my grandmother, Winifred O’Carroll, who was born in County Clare in Ireland, in 1887. I remember my mother saying she was one of twelve children. One of her brothers had moved to America to escape the poverty in Ireland at the time. She, and another brother planned to join him. The pair travelled to Southampton but only had enough money for one ticket. They decided she would take the boat and he would find work to pay for another ticket, and join her later.

On the day her ship was due to sail, her brother accompanied her to the docks to see her off and there they saw a short, handsome fellow with one arm in a sling, struggling with a large crate. They watched as he tripped over his own feet and the case of fine crockery, destined for the officers’ mess in France, smashed to the ground. She laughed like a drain while she helped him up, and it was love at first sight. Winifred gave the ticket to her brother, found work in a military hospital and married Alfred at the end of the war.

It is strange to think that I owe my existence to a bad tempered horse and a crate of broken china. And that’s only half of it. If Herr Hitler had not invaded Poland, my parents would never have met. But that story is for another occasion.