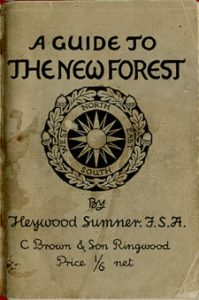 A Guide to the New Forest by Heywood Sumner
Author: Kath Walker

A review by Peter Roberts

A Guide to the New Forest was published in 1923 by Charles Brown and son of Ringwood. The guide, although produced more than 90 years ago, is in many ways the best guide to the woods of the New Forest.  Sumner shows their character by loving description as well as his very attractive drawings and map.  Two editions appeared; without advertisements for 2s 6d (12½p) and with for 1s 6d (7½p)

Sumner, in his preface, said:

This little guide-book is planned for the wayfarer – to suit his pocket both in size and cost.  It is written by one who has known and loved the Forest for forty years.  It claims to be a handy companion, giving a brief account of the District, past and present, of its topography, history, traditions and scenery; and it aims at supplying a useful introduction to the subject, reminiscent of the past, and of the varied beauty that pervades this wild expanse of wood and heathland….

It is difficult to add to that.  He deliberately ignored the church architecture as being described elsewhere but included such delightful descriptions of the real Forest that the book was reprinted not only in his lifetime but also fifty years later.  Following the descriptions of the Forest area by area he included chapters on ‘Natural Landmarks’, ‘Forest Terms’ and ‘Forest Notes’.  This allowed his readers, then and now, the opportunity to become familiar with Forest terms such as Agister, Assart, Vert, Estover and Turbary.  He listed the rights of common and of fuel and even gave brief notes on population in the villages as well as rainfall figures.  Lymington had an average of 33 inches for the years 1910-1919 as against nearly 36 inches at Cuckoo Hill where he lived at Gorley and 39 inches at Lyndhurst.

In the areas he works through the place names alphabetically making this a most useful reference book as well as a pleasure to read.  Under ‘Picked Post’ he states ‘This place is now usually spelt “Picket,” but “picked” was the spelling in the Ordnance Map of 1817, and in all maps previous to that date…Picked is a Wessex word in present use, meaning pointed…. The name probably referred to the pointed angle of the roads that join here.’