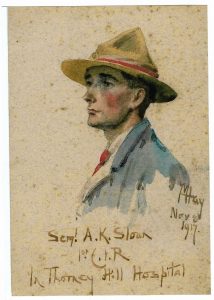 Wounded: May 13 1917 (National Library of New Zealand)
During the Gallipoli campaign “Alf” Sloan had his left leg broken by a bomb and was sent to a hospital England in June 1917 suffering from gunshot wound in the left leg, (British & Commonwealth Military Badge Forum)..

Alf Sloan survived the war at the rank of Sergeant, and returned back to New Zealand aboard the Transport No. 221 (Hororata) in March 1919.

It seems that some required fields are empty or you have not agreed on licence
LOCATIONS:
Bransgore
PERIODS:
Modern
SUBJECTS:
Diaries
Hospitals
Military
WWI
DATA SOURCE:
Contributions
New Forest Remembers