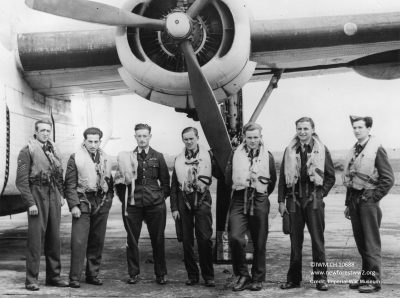 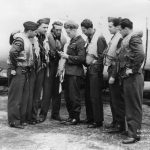 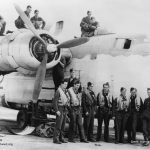 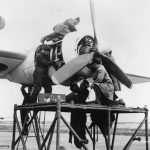 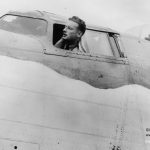 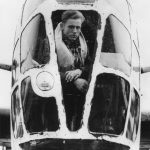 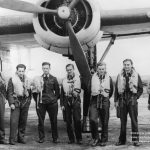 This series of photographs from 29 July 1943 was taken at RAF Beaulieu on the 3rd anniversary of No.311 Czechoslovakian Squadron’s formation.

No.311 Czechoslovakian Squadron was formed in 1940 at RAF Honington with crews of escaped Czechoslovakian aircrew and was equipped with Wellington I Bombers. The Squadron transferred from Bomber Command to Coastal Command in April 1942 and moved to Beaulieu in May 1943. They were re-equipped with Consolidated Liberators, a four engine heavy bomber, in June 1943.

Patrolling over the Bay of Biscay their role was anti-submarine work. One notable event was prior to the Battle of the Bay of Biscay when the squadron was responsible for the sinking of the German blockade runner Alsterufer on December 28 1943.

No.311 Squadron moved from RAF Beaulieu in February 1944 to RAF Predannack.

Sergeant Theodor Schwarz was 1 of only 2 ethnic Germans serving with the Czechoslovak Air Force. He was born in Sokokol (German equivalent Falkenau) in the northern part of Czechoslovakia, practically at the German border. A month after this photo was taken on the 30 Aug 1943 Sgt. Theodor Schwarz was killed in a training accident at RAF Beaulieu. He was flying in Liberator BZ785 with fellow crew members Sgt. Josef Bittner, Sgt. Josef Fisera, Flt/Lt Emil Palichleb, Sgt. Zdenek Rezac and Sgt. Emil Szeliga. All crewmembers were killed.

He can also be seen in photograph CH 10688 (third from right). It is possibly that this photo shows his fellow crewmen of that August flight but this is un-confirmed.

Apparently “The aircraft stalled whilst in a steep turn during a practice evasion flight and crash landed at 15:42 hours, probably due to mishandling. In addition, the fact that the aircraft apparently exceeded the normal all up weight laid down by flight limitations probably contributed to the incident.”
Sgt. Theodor Schwarz is buried at the Commonwealth War Graves cemetery at Brookwood, Surrey the largest Military cemetery in the United Kingdom. Sgt. Theodor Schwarz – Row 28. A. 7.
https://fcafa.wordpress.com/2011/05/04/brookwood/