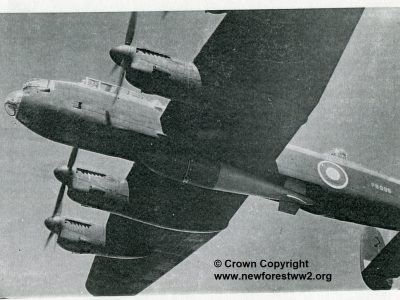 A series of photos provided by Frank Myerscough a Scientific Advisor for the Aircraft and Armament Experimental Establishment at Boscombe Down, Wiltshire responsible for the testing of Grand Slam at Ashley Walk includes this one of a modified Lancaster in flight with Grand Slam on board. The pilot is noted as Captain Bruin Purvis.

This is more information about him

HARRY ALEXANDER PURVIS (BRUIN or LEX), D.F.C., A.F.C. and Bar, born 21st October 1905 at Long Newton, near Hawick, Roxburghshire, Scotland, died 23rd December 1966 at Amesbury, Wiltshire, England, buried at Amesbury. Group Captain Royal Air Force. Entered (1924) The Royal Air Force College, Cranwell, Lincolnshire, England, and was commissioned (July 1926). He was selected to give the individual aerobatics display at Hendon Aerodrome, Middlesex, England, in 1929. Prior to World War II he was attached to the Fleet Air Arm and also test flew early models of the Spitfire. Served throughout World War II (awarded the D.F.C., A.F.C. and Bar, Mentioned in Despatches) with the Royal Air Force, including command of an airborne mine detonation squadron, command of a Hudson Coastal Command Squadron at Leuchars, Fife, Scotland, evaluation of American aircraft for the R.A.F. (April 1941-April 1942), command of the Performance Testing Squadron of the Aircraft and Armament Experimental Establishment at Boscombe Down, Wiltshire (April 1942-April 1945), command of the R.A.F. stations at Dum Dum (Calcutta) and Poonah, India.

On this site the Ashley Range Overview page has links to detailed pages about the targets, activities, archives and stories about the range or you can find out more about Grand Slam using the following links: