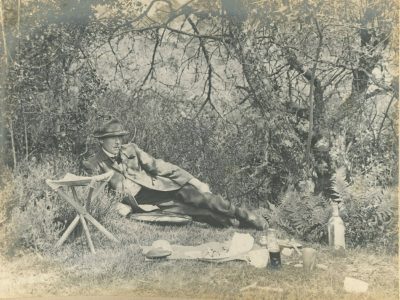 In the collection of the Christopher Tower Reference Library is an album of late Victorian New Forest photographs of exceptional quality. Library Volunteer and super-sleuth, Jo Smith, has been researching the man behind the camera….

Among the photographs which consist largely of views of the broad leaf woodland are a small number of views of more identifiable sites such as Shappen, the village school, Burley Lawn and some of children at the school.  Some of the photographs have been annotated in pencil, we think by Félicité Hardcastle.

Of these there are two photographs, each of a young man well dressed but casually posed recumbent enjoying a picnic complete with what appears to be a bottle of wine. Below the photographs are the following notes:

A third photograph is of a house which again is annotated in pencil:

A website search for the birth registration of a child with the name ‘Bruce Cooper’, from 1836 to 1900, revealed just two possible boys with a first name that corresponded to the initial J of the inscription.  They were John Bruce Cooper who was born in Croydon in 1869 and John Bruce Cooper who was born in Newcastle in 1893.  Logically the second of these would be too young to have taken the photographs, leaving the Cooper family connected with Croydon to be researched.

It soon became very apparent that John Bruce Cooper from Croydon had a very privileged upbringing, and one that would have easily supported the lifestyle suggested in the photographs.  Still, apart from the information in the photo album there were no official records found – census records or civil registrations in the county of Hampshire – that connected any member of the family to the area. The nearest was a reference to a servant who was born in Bartley, north of Lyndhurst, who in 1911 was working in Leicestershire for the family of one of John’s younger brothers.

The Cooper boys, six in total, were all of an age to have served in World War One, and it is in the series of records ‘British Army WW1 Medal Rolls Index Cards 1914-1920’ that an official record links one member of the Cooper family to Burley.

The house that was connected to the Coopers was Bisterne Gate, and the young brother of the photographer was Philip Howard Cooper.

Both young men had moved to Burley in the years following the sale Burley Manor in 1894 and 1895.  Campden House Cottage was built on the land to the south and western side of the village that had been bought by the Clough family in the first sale, and Bisterne Gate was on land that was sold in 1895 when land on the eastern side of the village around Bisterne Close were bought in small lots by individual purchasers.

John Cooper, who was born about 1840 in West Wickham, Kent, was the son of a country boot maker and his wife who had both been born in the village.  In 1861 the family was still living in West Wickham and John, then aged 21, was working with his father.

Recorded in his obituary in the Northampton Mercury 31 August 1906, the family moved to the rising metropolitan suburbs of Croydon where John’s father established a small factory.  As the business prospered, John was taken into partnership by his father.  The census of 1871 records father, stepmother and sister living in Lower Coombe Street which is where they had established their business.

In the beginning of 1868 John married Maria Mary Hooper the only daughter of Richard Hooper who in 1861was the licensed victualler of the George Inn in the Old Town area.  In 1871 John and Maria and their son, John Bruce were living in Dering Road.  They employed one domestic servant.

In 1872 John bought his father out, so becoming the sole proprietor of the business.  The factory was at first very small but was steadily enlarged and it is thought that John was one of the first to utilise steam power in boot manufacture.

With the business flourishing, premises in Leicester were acquired in 1876 and not long after the expansion continued with the addition of a small premise in Northampton and the top floor of a warehouse in Cheapside, London.

Back in Croydon the need for more room and better accommodation was required and to fulfil this need the palatial brick building -‘John Cooper’s Steam Boot Factory’ – was built.  It was the largest and one of the most important industrial buildings in the town.

A Boot maker would have made the basic boot, but often the finishing was hand done by outworkers in their own homes, who were paid for what they produced.  In 1881 he is recorded on the census as employing about 600 persons and his success is reflected in his personal household for he was employing a governess for the children, a cook, a housemaid, two nurses and a nursemaid.

His success was matched by a sense of social responsibility for he provided workers’ houses and three shops in Byrnes Road, an area that became known as ‘Snobs Island’, a snob being the current term for a cobbler.  He also was politically active, standing as the Liberal Party candidate for Wimbledon in the 1885 General Election.  He was a Magistrate for the County of London and Middlesex, and was the second Mayor of Croydon (1884 – 1885).  He was also an alderman for Surry County Council until 1894.

When production was relocated to Northampton in 1894, about 140 families moved with it.  The premises in Croydon were then used as a depository for a number of years until finally in about 1990 listed building consent for demolition was given by the GLC.

John and Maria had seven sons and two daughters, though one of the daughters died before reaching her first birthday.  John Bruce was the eldest and his baptism record in the register of St Peter’s, Croydon, shows the relevant dates.

The continued success of the business and the changes in family life as the children grew up, are also reflected in the census record.  In 1891 the family were living at Tandridge Court, Tandridge, East Sussex.  There they employed a butler, a footman, a cook, a kitchen maid and three housemaids who lived in the house and in buildings associated with the estate were a gardener and a groom.  John Bruce was not present that night and his whereabouts has not yet been established.  Another son, Ernest Leonard was at boarding school.

As mentioned above, the factory moved to Northampton, and John rented Delapree Abbey, to the south of the city.  There in 1901 John Bruce, three of his brothers and his sister were resident on census night. The three boys were all involved in the business.  The family were supported by fourteen house staff: – a butler, two footmen, a cook/housekeeper, a ladies maid five housemaids, two laundry maids, a kitchen maid, and a scullery maid. Also present on the census was a gardener.  The younger brother Philip Howard was a theological student at Leeds Clergy School.

In 1901 the firm built a new factory in Leicester which is regarded by many to be the most elegant shoe factory built in the city.

However a business needs to be constantly evolving and that was the reason behind the move that is described in the newspaper extract shown here.  It is from the Western Chronicle, dated 10th August 1906.  The move was to be a fortnight later.

Five months later, on 29th January 1907, his widow Maria Mary died while at sea on the SS Oratava.

The business was continued by the sons.

In 1911 four were still involved in shoe manufacturing and one had retired. Philip was a clergyman and another brother was a tea planter in Ceylon.

John Bruce who had married Violet Mary Gordon, daughter of General Thomas Gordon, Indian Army, in Kensington in the spring of 1907 was living at Daneshill Cottage, Basingstoke.  His occupation was recorded as ‘Dealer in Motor Cars.  There is no mention of the shoemaking business.

Although being over 43 years old when war was declared, John Bruce enlisted and was a captain in the Territorial sappers.  He did not serve abroad but died on 21st November 1915, the death being registered in the Bath district.

Some twenty five years later the connection of the Cooper family with Burley came full circle when in 1940 the younger son, Richard John, married Edmee Mary Budd.  The marriage took place in Kensington, but the home of the Budd family was Burley Hill, another property connected with the Clough family.

It seems that some required fields are empty or you have not agreed on licence
LOCATIONS:
Burley
PERIODS:
Modern
SUBJECTS:
Archives and Libraries
Events and Exhibitions
Museums and Galleries
Photography and Film
DATA SOURCE:
Contributions
GROUP:
Christopher Tower New Forest Reference Library