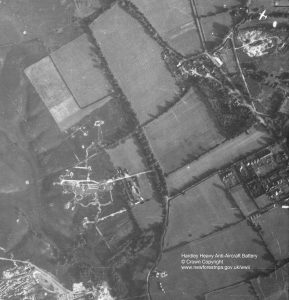 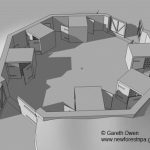 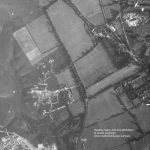 One of the many Heavy Anti-Aircraft (HAA) batteries here in the New Forest.

In the aerial photograph one can see the gun emplacements surrounding a central command position. The wiggly black lines (with white edges) are tranches for defending the site and taking shelter in if the site was bombed.  To the right of the site are the accommodation huts.

On HAA gun sites would have been a Vickers Predictor.  You can see a film all about this amazing device on the British Pathe website or view it below.

There is also some film footage of a display of the 3.7inch HAA gun carried out in London.

After the war the site became known as Gunsite Farm. It was eventually demolished to make way for sand and gravel quarrying in the 1980s.

Various shots of a machine called the Vickers Predictor. Animated diagrams and live footage explain how the machine works to calculate the future position of a moving target. Connected to anti-aircraft guns, the machine enables the guns to be fired at the correct position to hit the moving aeroplane. Good shots of artillery guns being lined up, loaded and fired. FILM ID:1188.22