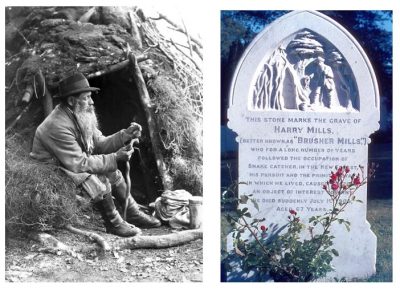 On the ground floor of the New Forest Heritage Centre lies a rather ordinary pair of metal tongs which, at a first glance, I would have passed by with little thought. However, this simple tool tells a far from ordinary story. Despite having lived in the New Forest my whole life, I ashamedly had never heard of Brusher Mills, the person to whom these tongs belonged, and therefore did a little research into his life and his particularly unusual occupation.

Born as Henry (Harry) Mills in 1840, it seems ‘Brusher’ most likely acquired his nickname from brushing the cricket ground at what is now the Balmer Lawn Hotel. Although, it has also been suggested it was a result of his clearing the ice for skaters at Foxlease Lake – perhaps both are true! Interestingly, however, neither of these activities provide a clue as to Mills’ most famous skill; snake catching.

Brusher Mills lived what one may call an unusual lifestyle, living not far from Brockenhurst in an old charcoal burner’s hut fashioned from branches and earth. He led a simple life with few possessions, though was clearly also a regular sight amongst the community. In particular he was a frequent visitor of the Railway Inn in Brockenhurst, which is now aptly named ‘The Snakecatcher’.

The metal tongs formed part of the quintessential image of Mills, along with a pair of knee-high boots and a forked wooden pole, which can be seen in the many postcards and photographs of him found in the Christopher Tower Reference Library. After driving snakes out of the undergrowth using the wooden pole, the tongs or ‘scissors’ which hung around his neck were then used to pick up the snake and put it into a sack or container slung over his shoulder. In a period of just six years Mills had captured close to 2000 snakes, and over the course of his lifetime this number is estimated at 30,000-35,000. As someone who has only ever seen one snake during my walks in the New Forest, this number is unimaginable!

The snakes were sold to collectors, namely Lord Londesborough, who regularly stayed at Northerwood House in Lyndhurst to train his falcons in the grounds. Lord Londesborough then sold them on to the London Zoological gardens, most likely to feed other snakes and reptiles. In later years, it seems that Brusher’s spreading fame also provided the opportunity to profit from the many tourists visiting the area. He would be highlighted by guides during the many coach trips that passed through Lyndhurst, and would reportedly release snakes from the containers slung on his shoulders before subsequently recapturing the snakes with ease. His entertained viewers would often reward him with tips, and he would also perform similar tricks at fairs and fetes, much to the simultaneous fright and delight of his audience.

In addition to being well known locally and featuring in the local press on multiple occasions, Brusher become an object of national fascination, particularly after a snake-catching trip he went on with Major general A.W.Drayson. Drayson subsequently proceeded to write about the expedition in both a popular sporting Journal and in “Boy’s Own Paper”.

Sadly, however, it seems Brusher was not popular with all local people and, in 1905, Brusher’s forest home was vandalized and burned down. It is likely this was done by locals wishing to stop Mills claiming squatters rights on the land he had been living on. The stress and upset of this event is believed to have been a leading factor in his death which occurred just a few weeks after the incident. His grave can now be found in St. Nicholas’ Church in Brockenhurst; his headstone being easy to identify by it’s engraving depicting Mills stood by his forest home with a handful of snakes. The life of Brusher Mills continues to intrigue people today, and he is still remembered around the New Forest. 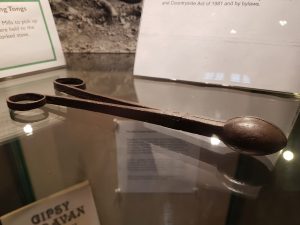