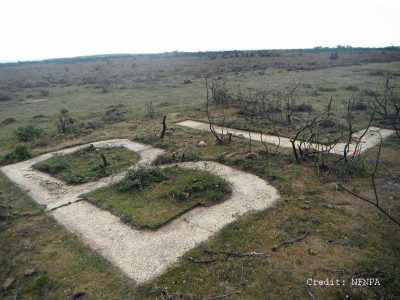 Beaulieu Airfield concrete pundit code 'BL' to help airbourne aircraft check their location rather like an address postcode. This is visible in front of the Control Tower area. Photo taken August 2013. Credit NFNPA 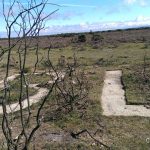 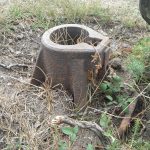 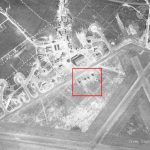 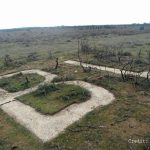 If you take a detour of the main perimeter track at Beaulieu Airfield you might stumble across a large concrete BL set into the ground. This is located in front of where the airfield control tower once stood. It is still possible to see various building platform earthworks and areas of concrete surviving.

BL was the airfield pundit code, often laid in or by the signal square in front of the control tower. It helped airborne aircraft identify the airfield. All the airfields had one, rather like a postcode.

At night there were light beacons that flashed the pundit code letters in Morse. During war, pundit light was mobile and set up offset from the field. Allied crews would be pre briefed on range and bearing of light from field, this prevented the Germans navigating straight to the airfield when on bombing sorties.

The concrete code would have been laid down before the airfield opened, part of the technical site along with the tower and signal square. It was probably covered over when the code was changed at the war’s end. This is why it is not visible in the 1946 RAF Aerial above, though the area of the control tower is marked in red.

Behind the concrete letters is a metal socket, which is possibly the base of the (visual) signal mast which would have also been part of the airfield signal square. The square showed information for airborne crews and the tower uses light signals, runway indicator boards and the signal mast for aircrew on the ground. It might have also been a windsock mast or it may have been the support for some met office weather equipment (the met measuring instrument enclosure was also traditionally located nearby).

Update: March 2017
Metal socket: short thick walled circular metal tube, an added keyway at the top joins to the tube and the entire item has external buttresses. The item is set into concrete. Site users have reported that the metal socket at Beaulieu has an inscription etched on top “MORTAR SIGNAL ML? 5 INCH” at the bottom “1942”.

RAF Harrowbeer’s website gives a little more info as to how and when this signal would be used:

VERY  PISTOL / SIGNALS  MORTAR
A Very Pistol was used to warn air-borne pilots to go round again if they were approaching with another aircraft in a blind spot or the aircraft was landing with it’s undercarriage retracted. The Pistol could fire pyrotechnics of different colours depending on the situation.

Another use was to alert pilots and air-crew at dispersal to scramble in the event of other methods failing, eg :- Tannoy or Telephone.

Very Pistol / Signals Mortars could be used to fire a brilliant flare high into the air to assist and guide airplanes to an airfield. The Signals Mortar would fire a large pyrotechnic vertically above the airfield in bad weather, usually used as a last resort for emergency guidance to an airfield.

The Signals Mortar at R.A.F. Harrowbeer is still in it’s original position, it has a diameter of 3 inches and is stamped with a date of 1943. It can be found adjacent to the Signals Square close to the Watch Office.

Thank you to our site users for helping to identify this item.