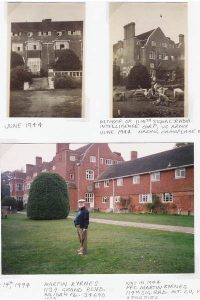 Martin Byrnes, a US veteran based at Avon Tyrrell who visited in 1994 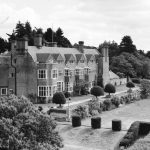 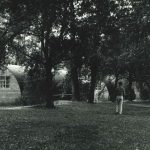 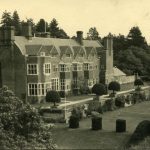 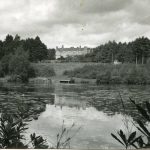 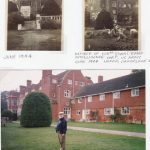 ‹
›
Author: Avon Tyrrell, UK Youth
We have a very unique and beautiful site with a Grade I listed calendar house with a remarkable history and Grade II grounds.  In 1881, Lord Manners made a bet that he would be able to buy, train and ride the winner of the upcoming 1882 Grand National, purchasing a horse called Seaman he went on to win the National securing himself £28,000, which he used to build Avon Tyrrell.
Avon Tyrrell House was built  as a calendar house with 365 windows (days), 7 outer doors (days per week), 52 rooms (weeks), 12 Chimneys (months) and 4 wings (seasons) and was designed and built by the Arts and Crafts architect W.R. Lethaby and was completed in 1891. It is reportedly the last built Calendar House in the country.
The house was requisitioned by the army during the Second World War as an intelligence gathering post, hospital and morgue. One of the recuperation sheds that were out in grounds is still down the road, used as a shed… 1943 on the Canadians and Americans were using it  including the US 114 Signal Radio Intelligence Company. Lots of gatherings of equipment and troops in May 1944. Veterans visited in 1994 & 2004 and gave photos and memories of their time here, a pictured attached of one of them, Martin Byrnes.
The Manners family never moved back but in 1946 the House and Grounds were put into a Trust and subsequently Avon Tyrrell was entrusted to the Youth of the Nation and officially opened by Princess Elizabeth (now Queen Elizabeth II) in July 1949.
In the grounds mortars and shells have been found, a snapped off bayonet in a tree, names/numbers scratched on walls. The soldiers used to set up by the house and fire mortars in the main lake for target practice – lots of shells were found in the mud when the lake drained in 2005, Bomb Disposal from Tidworth took them away, well as many as they could find.  Footing remnants of buildings and nissen huts are still there along with gun/searchlight emplacements. When one of the (new) accommodation units was being built in the late 90’s it was found to be on the site of a huge bomb crater that had been backfilled with rubbish from the era – very deep footings were needed to reach solid ground.
The previous Lord Manners (Bob) who died in 2008 was the last generation to grow up in Avon Tyrrell House before it got requisitioned. He told us that as a teeneager his first job at the outbreak of war was to use his discretion and decide where to house evacuated children locally that had arrived from London. He remembered huge (9″ Howitzers) guns set up along the terrace pointing out towards Christchurch harbour in case of invasion. He later went off to become a Mosquito pilot.  There is a story we have been told several times that some soldiers died in the lake at Avon Tyrrell in preparing for D-day, apparently they were testing a waterproofed canvas lorry tilt that could be doubled up as a makeshift boat. It flipped and they got stuck underneath, drowning.
“I can confirm the loss of soldiers whilst trialling a vehicle, my wife’s mother first husband , Lance Corporal A E James RASC was one of them on night 31st August/ day 1st September 1943, I have a copy of his death certificate which names the site and lake.” (Allan Jones, 2015)
Date: 1941
0 comments