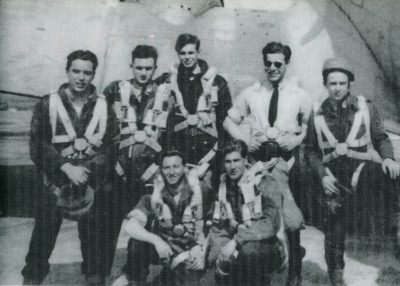 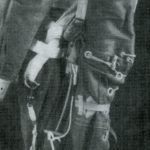 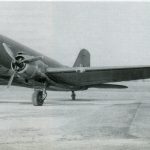 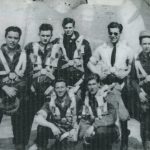 This article was first published in the ‘RAF The Official Magazine’ Issue 10, 2006.

Living today in the beautiful New Forest area, it is difficult to imagine how important this part of the country was towards the end and immediately after WWII. Many of the covert activities among the forest and heaths remained on the Official Secrets List until as recently as 1976. Dawn D’Arcy recently met one of the many who were involved in these secret and often quite unbelievably bizarre goings-on. Ted Robson
delights in recounting his exploits during the time he was in the RAF, and it is difficult to believe that he is recalling happenings of nigh on 60 years ago!

In WWII, Sergeant Edward Robson was a Parachute Jumping Instructor in the RAF stationed at Upper Heyford, in Oxfordshire. First he had to qualify as a Physical Training Instructor, so that he was competent at gymnastics, then he was taught by qualified parachute instructors. Ted’s task was to train troops in the Army Parachute Regiment. Many of them were Norwegians, and when I asked if there was any difficulty with the language, Ted laughed, “They all spoke excellent English and were often easier to understand than many of our own troops with regional burrs”. Obviously, even with the pressures of wartime, it would be suicidal for them to parachute out of an aircraft before they had learnt basic skills, so in the beginning they jumped from a platform about 30ft from the ground, They were fitted with a normal parachute harness, but no parachute. On the platform was a small fan with a rope attached to the trainees’ harness. By pulling on the rope as they jumped, it had been calculated that the resistance of the fan against the air would act as a brake, slowing their descent to the normal speed expected when jumping from an aircraft. Finding the system actually worked, they overcame their initial trepidation and leapt into space as far away from the platform as they could, enjoying the experience. Ted always flew and jumped with his trainees when they graduated to parachuting out of the aircraft, so he has absolutely no idea of how many jumps he made, but it must run into the hundreds, if not the thousands.

In 1946, AFEE (Airborne Forces Experimental Establishment) asked for six experienced jumping instructors to volunteer to work for them. Experimental establishments had a dubious reputation in those days and it needed some sort of incentive to persuade anyone to volunteer. “Where is AFEE?” came the question. “Oh, it’s at Beau Lieu,” they were told, “I think it’s a French Airfield just a few miles from Monte Carlo.” That put a whole new complexion on the posting and the whole team volunteered! The next day they received the route form for their transit to Beau Lieu – ‘Didcot, Reading, Basingstoke, Southampton’. Six somewhat wiser lads eventually arrived at Beaulieu – in the New Forest! Beaulieu airfield was opened in 1942 and used by RAF Coastal Command until taken over by the American Army Air Force in 1944. It was handed back to the British in 1946 and became the AFEE.

Ted takes up the story…
“The work we were principally engaged in was to determine the maximum amount of equipment a paratrooper could jump with. I found it amazing that no one had actually thought of doing this before, especially when you consider that there had been airborne invasions in such places as North Africa, Sicily, Italy and of course Holland, Belgium and France. Anyway, after the war the Ministry of Supply or the Air Ministry, I’m not sure which, decided it was time to find just what troops could actually be expected to carry when parachuting out of an aircraft. Better late than never I suppose. We were under the command of an Army Major who, together with a team of highly qualified civilian boffins worked out how they wanted the tests performed. They planned a series of trials, told us what was required, and all we had to do was prepare as best we could and work out how to do the actual jumps. The six of us were joined by two more PJIs. They were a great bunch and we had a lot of fun, but by golly – the things they asked us to do became unbelievably difficult.

The first series of jumps required us to be in full Army regalia of rubber crash helmet, full Army webbing, bandoliers of ammunition slung round our necks, two grenade pouches, complete with grenades, jumping jacket and boots. In addition, we had a 401b kitbag strapped to one leg. The weight of the equipment meant we were unable to walk properly so we had to shuffle down the aircraft, as best, we could. Thus burdened we did a series of jumps at varying wind speeds, starting in very light winds and working upwards. Normally paratroopers are not allowed to jump in wind speeds exceeding 15mph because of the crosswind dangers on landing. We were told to go up to a somewhat questionable 30mph if necessary. The aircraft, we were jumping from were the famous C-47 Dakotas.

We always held the same position in the ‘stick’ as we called the sequence in which we jumped out. I was always first into the aircraft, which meant, of course, I was always last out. A second aircraft shadowed us on each flight, taking photographs to record every jump we made. It all went splendidly and we had brilliant weather. The second series of tests required us to jump both with and without reserve parachutes, with leg or chest kitbags and often with heavy loads such as the Vickers machine-gun. We also jumped with two and three-inch mortars. We did not land with the kitbags strapped to our bodies, as there was a quick release system that was activated by pulling a toggle on the webbing on our chests. When the toggle was pulled it released the kitbags so that they dropped away, secured by a 20 foot-length of rope. This meant the kitbags dangled 20 feet below us, tending to oscillate of course, and they hit the ground first. In a sense it was a plus, because, when they hit the ground it took the weight off the chute and caused it to billow which had a slight braking effect. The landing area, however, was littered with gorse bushes – very painful to land on!

As I mentioned, I was always first in and last out of the aircraft, and there was now a considerable delay between the first and last man leaving. On one particular day, because of the direction and speed of the wind, I knew I was well past the dropping zone when it was finally my turn to exit the aircraft. As I toppled out I could see Hatchet Pond coming toward me. Being so weighed down, struggle and twist as I might, I could not avoid the inevitable and the next thing I knew I was at the bottom of the pond. It was at the end of October or early November when I had my ducking so it was not exactly a welcome dip. Thankfully I had not landed in the middle of the pond and eventually managed to haul myself out, completely sodden and not in the best of spirits. Shortly after this incident I was demobbed, it was the 11 November 1947 – Armistice Day.”

Acknowledgement: I would like to thank Alan Brown (the member of the PJI crew who took the photograph) for his input into this article. Alan is the author of some beautifully written and fascinating books illustrating the work of Service personnel in First To Go and Twelve Airfields.

Seven of the eight RAF Parachute Jumping Instructor team members, including (back row from left): Sgts Pelt, Watson, Hutchingson, Robson and Hodgekinson, and (front row from left) Davies and Barnes. They are posing before a C-47 in June
1947. The eighth member was the photographer, Sgt Brown.
(Author’s Archive)

Paratrooper wearing the leg kitbag for a heavy mortar, one ol the many out-sized items carried by airborne units.
(Author’s archive)