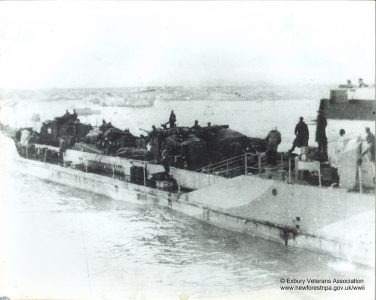 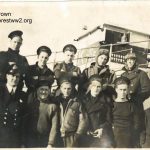 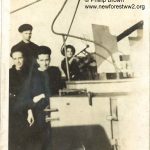 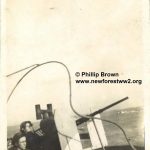 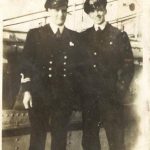 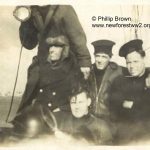 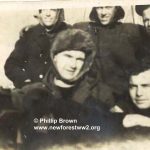 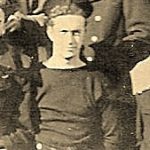 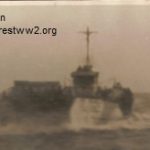 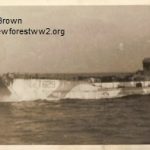 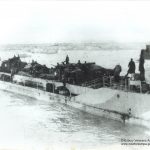 This article focuses around photograph “HM LCT 629: Juno Beach, 6 June 1944 (First photo)” as it caught the eye of Phillip Brown. Phillip’s father Frank Brown was a crew member during the D-Day landings.  This photo was donated to the project by the Exbury Veterans Association, to find out more see the Exbury Gardens article.

About HMLCT 629:
A Mark IV Landing Craft Tank, part of the 31st LCT Flotilla (or ‘Thirsty First Flotilla’ as it was known) which was part of ‘K’ LCT Squadron. ‘K’ LCT Squadron was part of Assault Group ‘J’ and was assigned to JUNO beach at Courseulles sur Mer in support of the 7th Infantry Brigade of the 3rd Canadian Division, the craft delivering the 12th and 13th Regiments Royal Canadian Artillery.

HM LCT629 carried 8 self-propelled guns in the form of Sherman tanks with the turrets removed and 75mm guns installed.

Second in command, known as “Jimmy the one”, was First Lieutenant Edward (Ted) Bentley

“Jimmy the one”
Naval nickname for the First Lieutenant of a ship. In the early days he was referred to as the “First Luff”. Usually nowadays abbreviated to JIMMY and known as NUMBER ONE.

Posted to Combined Operations at HMS Shrapnel, Southampton where he was places with a crew on Landing Craft Tank HM LCT629 of 12th Flotilla of the 31st Squadron ‘J’ Force.

Demobbed in July 1946 and sent to Wembly Stadium to collect his de-mod gear (suit, money etc.). He later married in Aug 1947.

During the following days they made various crossings of the Channel with extra equipment (lorries, tanks, supplies etc.) the return journeys to Southampton always took something back, crashed aircraft, equipment, German POWs etc.

Post D-day:
Transferred to LCG(M) 144 (Jimmie). Finally promoted to Lieutenant R.N.V.R. and Skipper of LCG(M) 128. Ted has contributed an oral history of his memories of HM LCT 629 and D-Day as well as a number of documents.  You can find out more in a follow up article: HM LCT 629 and Crew – Continued.